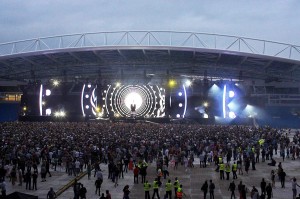 We were asked to provide power for the 2-day Fatboy Slim gig at Brighton’s Amex Stadium in Summer 2012 featuring some of the world’s top DJ’s such as Carl Cox, Norman Cook (of course) and many more.

As it was the first gig ever held in stadium it threw up the usual teething problems which were all overcome by the Vital team!
2 x pairs of 500kva gennies were put in place and all cabling for sound, lights, tv and the huge 60 metre long video wall were all run in and the show went ahead without a hitch. We also provided the power infrastructure for the incredible laser display which was part of the show.
What they said:
We set the bar high on what needed to be achieved. We know it was tough – but from our perspective at least it was hugely worth the effort – the shows were fantastic.
Huge respect and thanks from me personally, from Norm and from team Fatboy for all of your hard work and dedication to duty.
Mark Ward – Tour / Production Director – Proper Productions.