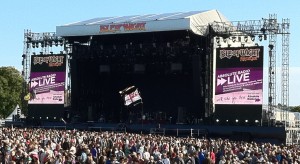 Vital Spark are the main electrical contractor for the Isle of Wight Festival which is held in Newport, Isle of Wight every June. The Isle of Wight Festival of the Noughties is very much in homage to the original famed festivals which took place from 1968 with Jefferson Airplane headlining that year to an audience of approximately 10,000 people. In 1969 Bob Dylan was the star attraction and the audience swelled to a massive 150,000. Of course the final IOW festival of that era was Jimmi Hendrix’s swan song 1970’s event which attracted well over 200,000 people to become one of the largest live music events in UK history.

The festival was resurrected in 2002 and Vital Spark were brought in to provide the electrical infrastructure. The Vital crew have had to work overnight on many occasions to meet the power requirements of bands such as The Stereophonics, Kasabian, The Police, Jay Z, The Prodigy, Faithless, Muse, The Rolling Stones, Pink, Paul McCartney and many more…… There will be no let up this year for the 10th anniversary – we will have to deal with powering the production for Kings of Leon, The Foo Fighters and Kasabian as the headline acts so another busy year for the crew!

There are 90 generators in total powering the huge campsites and production for the Main, Big Top, Acoustic and Green stages and all the other themed stages throughout the site.We have 12 trucks of a full repetoire of electic distro and lighting equipment shipped over to the Island which includes over 20km of festoon lighting and lighting towers for the campsite. The festival attracts around 70,000 visitors across the weekend and is a massive project for VSL involving over 20* crew being on site for a total duration of 4* weeks from start to finish.